Spare a moment to think of the problems in a cash economy with a cash shortage. (Don't joke about digital money. Please. Just don't.)

Liberia has a shortage of cash. Within living memory people have made change by tearing a bill into pieces. When banks dispense cash, they often hand out those mutilated banknotes, which are worth ... what?

But there's more. The banks are complaining of a nonperforming loan rate of 56%, which of course means that when someone comes to get money out it puts a strain on the bank. A few years ago several banks started repaying deposits made in US dollars in a mix of US and Liberian dollars. That caused quite a stir at the hospital when payday came.

They are also complaining that:

Governor Tarlue named several reasons behind the money shortage which he said was exacerbated by COVID-19, the high demand of money during the festive seasons (July 26 and December 25), the limited ATM machines in the country (157) and the December 8 Special Senatorial Elections. Chief among them, he said, include the circulation of huge quantity of money outside of the banking sector. As of December 2020, he said L$25.3 billion was in circulation in the Liberian economy, and of that amount, the currency outside of the banking sector was L$22.5 billion, representing 89.4 percent of the money in circulation.

Except where is the money? Hiding under mattresses? You'd think that some of it would have to creep out from time to time to buy groceries and cell phone minutes and fabric and other everyday items. How actively is money really circulating in the markets? I can't find out, but reports say business is bad.

The government bought some fresh bills last year--or maybe they didn't--at any rate there weren't any fresh bills when they went looking. They want to print 27 billion new L$, but they don't have the money to do it (about $21 million).

I can't speculate with any certainty, because news is unreliable at best. I doubt that foreign speculators have been buying up Liberian dollars (as one rumor has it)--I haven't thought of a way they'd make money that way. Maybe I don't have a dishonest enough mind. Probably this is an unintended consequence of something else.

Lockdowns haven't helped cash flow. FWIW, Liberia has had 84 deaths attributed to coronavirus--malaria dwarfs this by orders of magnitude.

I was checking some old posts to make sure I wasn't repeating myself, and grew annoyed at the number of broken links I found.

The Wayback Machine has gotten better at re-writing internal links. I'll see if, for links in future posts, I can find a Wayback link too. This probably won't work for this-very-morning links, but maybe after a few days I can revisit posts and update. If I remember.

I once thought of scripting a search for broken links, but sorting through blogger's internal web code is messy, and may not be robust against their changes.

Anyhow, as a demonstration: A vanished website a with couple of stories about Ranger training in Panama.

I predict that, so far as those Trump supporters go, the weekend will be peaceful: With or without National Guard.

Big Tech-er is watching us. Small towns don't have much privacy either. But the lack of privacy in the small town is symmetric. You know the snoop's business too, and where he lives. You have no idea who is drilling down in the databases to look for dirt on you.

I don't know how to rebalance this.

I have tried to always remember that the internet is forever. I declined to post hilarious anecdotes about the children when they were too young to read them, since one day they would be old enough to be embarrassed. I've tried to be very careful to not disparage my colleagues at work--which fortunately is easy. Now and then I tried a cheap joke on some other sites that I'd not do today, and some comments need context, but on the whole I don't think I've been unfair, or written much that I wouldn't mind my name being on. Which is not to say a few colleagues might be horrified at even mild objections to their worldview.

Not everybody keeps away from personalities, though, and Second City Cop seems to have been forced off the air. I presume from that statement that Google was about to breach anonymity of the commenters, who would doubtless have been forced out of work. (Legal, shmegal, it's Chicago, and the FOP probably wouldn't be any help.) Something similar happened to Star Slate Codex--the author's name was revealed and his livelihood threatened.

Don't take being able to write freely, or read freely, for granted.

A spray bottle of tile-cleaner has one of those rotating nozzle controls. Of the four possible nozzle positions, 2 are ON and 2 are OFF. It is pointed at me, and from this direction the nozzle reads NO. Good advice.
Posted by james at 9:06 AM 2 comments:

Dr. Morales tries to explain quantum mechanices without math. This article--supposed to be the first of several--is about the basic experiments. I'll add more to this post as I find them.
Posted by james at 9:55 PM 1 comment:

Madeleine L'Engle wrote these meditations on the difference between icons and idols in life. For her a penguin is an icon, and too funny to be an idol--but other things (e.g. the stars) can be dangerously close to idols. Some of the meditations are very moving. Unfortunately one of her icons for evil seems to be "fundelits," who don't closely resemble the people I know--but then a famous writer attracts strange creatures intent on correction.

UPDATE: No, I do not endorse all of her scriptural speculations.

Do those going nuclear with canceling attacks remember the saying "You might as well be hanged for sheep as for lamb"?

Maybe not. Quite a few of them seem unwilling to believe that unintended consequences are possible--certainly never in their socio-political plans.

I was looking for permabond ET5401 (heat resistant epoxy). This was on the first page at amazon. 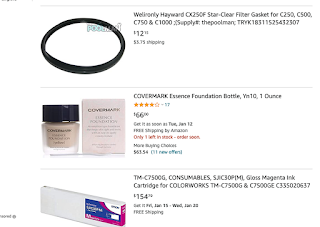 Perhps the connecting theme is that one can maintain a youthful look forever with a clear epoxy coating?

A weird story: The Liberian Baptist Missionary and Educational Convention denies that they are trying to reclaim land from the Jamaica Resorts (including some owned by President Weah. "the four lots ... have never at any time been part of the Seminary's property. The seminary is on the peninsula in the middle right below. (My father is buried there.) The original claim came from the "Baptist Transitional Committee" (never heard of it before) 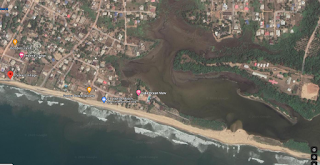 Thinker's Village is over on the left hand side of the picture. I can't find "Jamaica Resorts", but since Weah hosted a post-Ramadan fast-breaking for 400 there, it can't be small. From the looks of the ruins on the shore, I don't think the ocean side of the lagoon was ever part of LBMEC's land. So what the BTC was talking about I do not know.

Of course, one always finds oddities in the corners. SNAFU is a place. 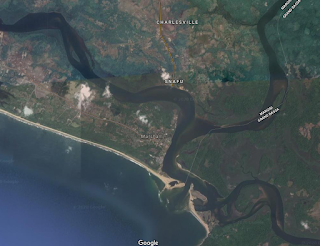 Gender (from genus, kind) is weird. Given that most applications of it have nothing whatever to do with sex, it might be less confusing for grammarians to refer to A and B rather than masculine and feminine. Or neuter. Or common. Or animate/inanimate.

My original question had to do with whether languages from the same family tend to give the same genders to nouns (not always), but found deep rabbit holes when I left Indo-European: noun classifiers in Chinese etc (which includes some "counting" classifiers) and the more general noun class which seems to be a generalization of gender.

Oh joy. How are these assigned; and whodunit? From the "noun class" article:

I get the impression that some of the rules can arise or change when two different languages meet. Old English had three genders, as German does, but modern English has only a handful of relic gendered nouns. Maybe the parallel language use played some role--though I can't quite visualize (auralize?) how.

Why would these arise in the first place? All I can think of is that somehow, at some time, a word just sounded more pleasant or more appropriate with a le instead of a la, and the nouns that sounded better got the characteristic. Of course animate/inanimate seems pretty clear.

Archaeologists are studying the Indian use of Yellowstone.. Apparently it was quite popular with various tribes in antiquity, and also up until the point they were driven out.

There is no truth to the idea that Native Americans were afraid of the geysers and thermal features.

According to Hunts to Die, in his interview with the photographer-ethnographer Edward Curtis, the spirits in the geysers were afraid of people, rather than the other way around.

That sounds exactly right. They seem supernatural, check. They don't hurt you unless you monkey with them, check. But if you watch them, nothing happens. And then, ten minutes after you've left, you hear the geyser again. What else can you conclude?

Was the election stolen? Maybe; it depends on what you mean.

Were there clear cases of classic fraud? Sure looks like it--I'm pretty sure that Georgia election official was lying. Were those enough to tip the balance? Nobody knows, and they've been very careful not to find out. Were all the suspicious cases fraud? I very much doubt it. Trump is wildly unpopular in some circles. Was there unprovable chicanery with the mail-in ballots? I'll bet there was. Will even legal mail-in ballots skew in favor of densely populated cities? Obviously. Is this unprecedented? Read about Tammany Hall.

Is this kind of invasive protest going to do anything useful at all? Hardly. Maybe it'll scare a few senators, but I'll bet they're more likely to be vengeful than penitent. And it's very much like complaining about the barn door when the horse got through it half a year before.

Why wasn't the National Guard there, and why did the police let demonstrators through the barricade? Maybe that was after the legistlators were evacuated from the hall? Who did they think they were letting through? When I was there, the capitol police took the inner sanctum pretty seriously.

Without a tried finding to the contrary, Pence et al have to presume that the election results were valid. Imagine if that weren't true and elections could be blocked on suspicion. It's bad enough right now, with automatic impeachment proceedings as a precedent (chatter started even before Trump was sworn in--though Biden is probably immunized against impeachment).

UPDATE: I see. The perimeter had already been breached elsewhere, so the cops were retreating to regroup.