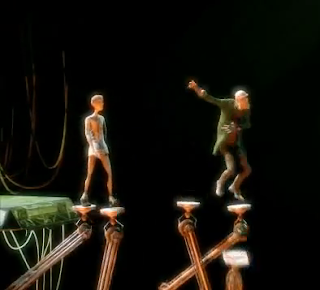 Youngest Son is very interested in computer animation, and recently showed me a video made with open source animation software; called Elephants Dream. The animation is well made, but the movie is cruel and unpleasant—but there's one evocative scene in which Proog is dancing in the air. Wherever he swings his foot, a support rises to meet it, so that he never falls or misses a beat.

Years ago I had an image of a blind girl running through the woods—never knowing what lump or hole lay before her foot but always adjusting her stride to meet what she could not see. Stepping to the left without knowing of the tree, lengthening the step and meeting the only rock in the stream; running blind but protected.

That same kind of abandon—running into the unknown not knowing where the next meal will come from but certain that it will appear—I fear and long for, and see in men like Francis of Assisi.

I'm saving up larger denomination Swiss coins for use in the TPG machines. A stack of 2sf coins hefts a little, but they're just decorated disks of metal--plus something. In a sense I'm looking at little promises, and a kind of embodied trust. Not "in God we trust," but trust in the other Swiss; trust in their fellowman to trade effort for effort in an understandable way. Trust that you can wait until tomorrow before getting what you need: work now and be able to eat next year. Trust that someone else will tangibly value your effort.

Dante put forgers and coiners in the second-lowest circle of hell, next to the traitors; and they are a species of traitor too. Earlier, and perhaps not foolish, centuries put them in boiling oil. The forgers, whether amateur or official, destroy trust as they debase the money.

The official forgers rob from everyone at once on a huger scale, and history considers them villains--villains and traitors they surely are. But most of them went into the business with a "only a little bit won't cause problems" attitude: 4.5grams of silver or 4.4 grams--what can such a little difference do? It is only a little bit of robbery--but it is a lot of breaking trust.

I just got email from a grad student asking why two groups disagreed about the default angle for a chunk of hardware: One had π and the other used -π.

It doesn't matter if the ones controlling the mining are big business or government; they and their friends get the money and the "shortages are shared among the peasants." Unless the state doesn't actually need the windfall, the windfall is bad news. You need an existing social and economic infrastructure to manage these things. Some culpably naive folks claim that a democratic government(*) will use windfall mineral wealth fairly. Observation says otherwise--unless (as in Alaska) the money isn't actually essential or there's a very strong culture of all pulling together already in place.

It might almost be better for a business owned by a single person to exploit the resource, because there's a chance the owner might develop a conscience. A board of directors or government bureaucracy never will.

(*) What stranger incantation is there than the phrase "democratic government?" It conflates a form of selecting particular government officials, the liberty of the people, and a constellation of sensed responsibilities. Just have right form of government, and everything happens by magic.
Posted by james at 9:03 AM No comments:

The World Cup is on, and there's now a projection TV in the CERN cafeteria. At dinner time the games were over and the sports wrap-up was on.

If I ever flatter myself that I'm starting to hear french, all I need do is listen to a sports broadcast. They speak so rapidly, with jargon and metaphors--I can make out one word in 10, and that's usually something trivial. It wasn't until the replay that I understood that the Swiss team had won.

We bought our house 16 years ago, from a woman who no longer needed to fix it up since she was getting married. The previous tenants had been three early 20's guys who specialized in parties. Some earlier owner had been a contractor who'd tricked out the place using this and that (including a central AC unit that never worked, basement paneling and an out-of-square basement room). Somebody had done some motorcycle work and painting in the basement. The short wrought-iron railing along the basement stairs had bar spacing more than wide enough for small children to slip through, and it was low enough that inebriated guests of the party-ers had more than once taken tumbles. (We replaced that with a wall surmounted with a lattice.) On a 90 foot long lot there had been 8 trees--only two remain. None were suitable for tree-houses, least of all the Russian olive.

Repairs and gardening are archaeology. Traces of aluminum siding were buried in the window frame. In inaccessible corners drippings of the old bright yellow paint liven up pipes in a bathroom. Behind old molding was 80's era cereal box toy cards. As we've dug the gardens we've found a little metal car, toy soldier, and marbles. On Thursday we found an old torn tablecloth trimmed with lace holding the bones of a small dog.

Nowhere is there enough to tell what those who lived before us were really like--just traces.

The Denver airport now has a giant statue of Anubis to join the giant demon horse statue (that killed its creator). Anubis was the Egyptian god of mummification. Mummies don't seem terribly apropos for an airport, but presumably Anubis also oversaw the petrified food served to the dead--and to fliers.