Truth to tell, I had been getting a little worried, but back in June they came through, and IceCube announced two neutrinos with energies above 1 PeV. It isn't perfectly certain that they are electron neutrinos--they might be a flavor-changing interaction--but they dump quite a lot of energy (which we see as light) in a small area. Some of the light manages to travel quite a way in the ice, as you can see from the pictures in the lower right and lower left. 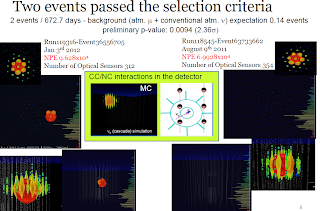 To get an idea of the scale, the chains of sensors are 1 km high and spread
across 800m, so the light went quite a long way. The size of the blobs tell how much energy that sensor saw, and the color tells about the time the light arrived. (The size of the blob has nothing to do with distance.) The other pictures show different projections, with histograms of how much energy was dumped. The center pictures are of a monte carlo simulation of an electron neutrino interaction and a cartoon of what happens at the center. You'll probably have to click on the image to get a decent view.


The lower corner pictures look a little like the old nuclear tests, though of course the energy dumped in the ice is far less; only like converting a million protons into energy. I know that would violate all kinds of conservation rules: humor me. But whatever made those particles would make our biggest nukes look like damp splashes by comparison.


This is from Aya Ishihara's talk at Neutrino 2012. I wasn't there, and I didn't help with the analysis--but the pictures are too cool not to show.