In a tiny grass spot next to the city hall is a boulder with a plaque: 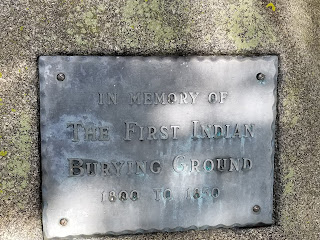 There's a story there, right?

Per Waymarking: "The remains of the Indian cemetery were excavated during some construction, in 1930, at the Saugatuck centennial celebration, a boulder with a bronze plaque in "Memory of the First Indian Burying Ground, 1800 to 1850" was dedicated and a few remains were reburied in a mound nearby."

OK, that makes sense. I didn't see any mound, though; not by the new City Hall or the Cook Park entrance or the yacht club. 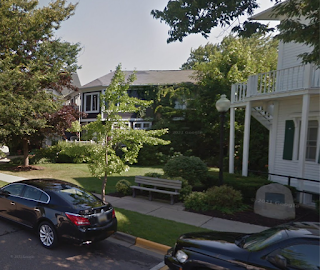 Nope, no mound. Per "Between thirty and fifty burials were encountered during excavation work for the construction of a new community hall." There should have been something to see.

The bones which were found in the burial grounds were gathered together and reinterred beneath a small mound of earth near the southwest intersection of Butler and Culver Streets across from the Village Hall. Nearby a stone "to the memory of the old Indian burying ground..." was dedicated with ceremony at the 1930 celebration of the centennial of Saugatuck. Johnson Fox, then just a boy, remembers being the one who actually spoke the words of dedication dressed in an Indian outfit made by his mother. The burial mound was leveled during street widening in the 1970s, and for a few years only the curved sidewalk which had gone around the mound showed its former position. Eventually even that was removed, although the memorial rock remains.

The artifacts on the second floor of the Saugatuck Village Hall were on display for several years. but, according to old-timers, since the museum was totally unsupervised, many were stolen. The rest were eventually, according to the newspapers, given to the brother-in-law of one of the town officials who was a collector of such things.

Ottawa, though sometimes there were Potawatomi in the area, in case you were interested.