HHS released their followup report on the Head Start Program this past December (some cynical sorts noticed that this was 2 months after completion and safely after the elections). This has been a longitudinal study. The first report, in 2010, apparently didn't show that Head Start had much effect. This report isn't much different.


There is clear evidence that Head Start had a statistically significant impact on children’s language and literacy development while children were in Head Start. These effects, albeit modest in magnitude, were found for both age cohorts during their first year of admission to the Head Start program. However, these early effects dissipated in elementary school, with only a single impact remaining at the end of 3rd grade for children in each age cohort: a favorable impact for the 4-year-old cohort (ECLS-K Reading) and an unfavorable impact for the 3-year-old cohort (grade promotion).


They easily defined a control group (though this probably biased the sample toward intensely needy areas):


Selected Head Start grantees and centers had to have a sufficient number of applicants for the 2002-2003 program year to allow for the creation of a control group without requiring Head Start slots to go unfilled. As a consequence, the study was conducted in communities that had more children eligible for Head Start than could be served with the existing number of funded slots.


So what were the results?


Consider 3'rd graders who had been in the program in 4'th grade. Compare them to a similarly selected group of kids (same kind of family condition, race, family income, etc) who hadn't been in Head Start. They say:


Hey, they found that it improved at least in one category of social skills, right?

I took the liberty of changing the sign of the statistical "effect" to positive for good trends and negative for bad ones--their tables are a little hard to interpret otherwise. 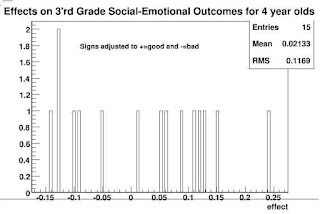 There's a slight shift, but nothing to write home about, and the effects look pretty random. Some will be extra high, some extra low--that's the luck of the draw. Nothing much to see here.

Let me emphasize that. If you pick enough different things to compare, you will wind up with some random difference which looks "statistically signficant." But it isn't. My advisor used to say that if you look at 100 histograms, one of them will have a 3-σ peak in it.

OK, how about scholastic measures? Consider 3'rd graders who'd been in the program at age 3, and compare them to a control group. They say: 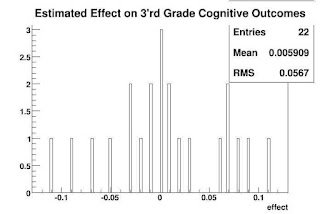 Zero, zilch, nada. No sign of anything good or bad.

Everybody loves the idea of Head Start, but the HHS numbers suggest that it isn't doing anything except wasting money and talent.

Does anybody have any ideas for something that does work for these kids? If so, let's do a U-turn at Head Start. If not, let's wrap it up as a bad job.

"Effect" is taken from their tables; I didn't try to recalculate it.
Posted by james at 7:41 PM